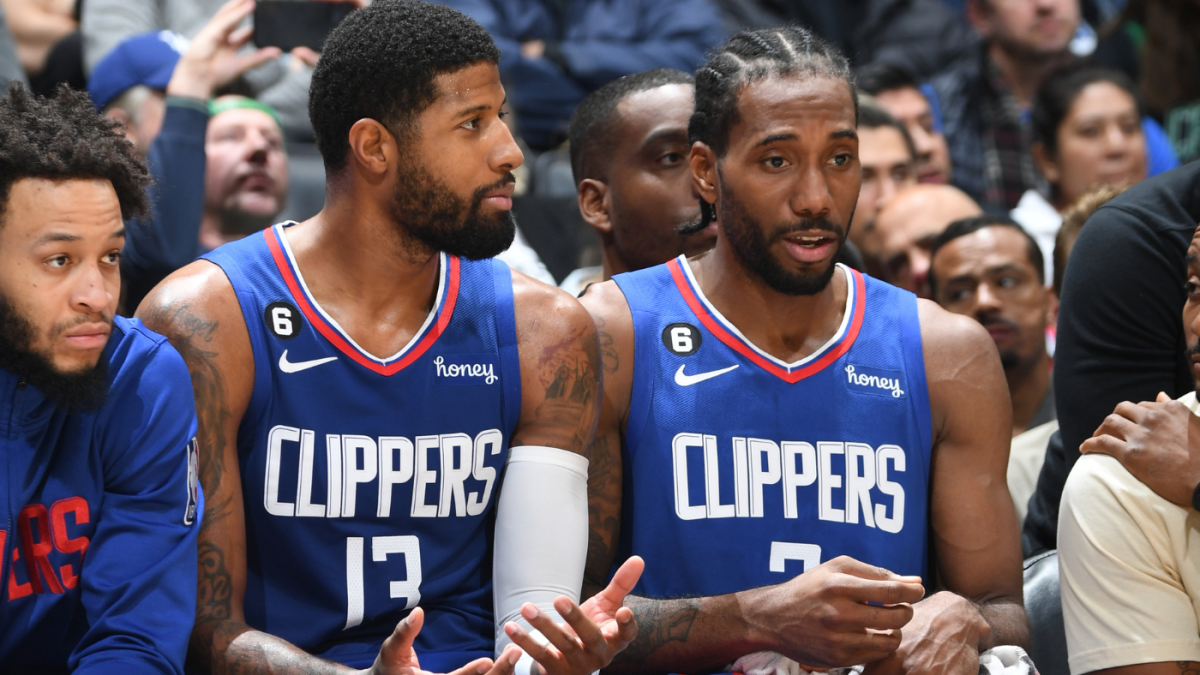 NBA fans love the smell of trade season in the morning, and the odoriferous emanations are more pungent in some cities than others. While teams like the Boston Celtics, Denver Nuggets and Memphis Grizzlies can look at their teams confidently heading into the Feb. 9 trade deadline, others are looking at their roster holes like LeBron James glaring at JR Smith.

Therefore, varying levels of urgency are being applied to each NBA front office. We decided to take a look at the five franchises facing the most pressure heading into the 2023 trade deadline.

Bottom line: Underperformance and lack of continuity due to injuries has created a sense of urgency for a preseason title favorite that’s been undeniably mediocre.

“Hey, don’t you know that when Kawhi Leonard and Paul George are on the court together…” Blah, blah, blah. At this point, the championship-contending Clippers exist in a parallel universe with hot dog fingers and Raccacoonie. In this universe — the one that matters — they’re a .500 team with the fourth-worst offense in the NBA. Leonard and George have only played 18 games together, and they’re 11-7. Not exactly confidence-instilling.

The good news is that this roster is perfectly constructed for a trade, with mid-level salaries that can be used as filler for a larger deal or swapped for a better-fitting player at a similar cost. Nic Batum, Reggie Jackson, Robert Covington, Luke Kennard, Marcus Morris Sr. and Norman Powell all make between $10-16 million, and Jackson’s is the only contract that’s expiring at the end of this season. The Clippers also (finally) have a first-round pick to dangle in a trade, and given the current state of the team with two aging stars, that 2028 selection could look pretty juicy to a potential partner.

Point guard is the most obvious area ripe for improvement, with Jackson taking a step back this season and the Clippers sporting a minus-6.6 net rating with John Wall on the floor. Wall’s $6.4 million salary could be useful in a trade, with potential targets such as Utah Jazz vet Mike Conley and — a bigger swing — Raptors point guard Fred VanVleet.

This team was built for championships, coming extremely close two seasons ago, but right now it just feels like something needs to happen, if for nothing else than to shake up the malaise. Leonard is starting to play like his old self, and the last thing you want to do is waste a healthy season from him, since we don’t know how many he has left. The urgency is certainly there for the Clippers.

Bottom line: Possessing multiple impactful players heading towards a deadline that lacks them, the time could be right for the Raptors to sell off their pieces and look towards the future.

Toronto was listed by our Sam Quinn as one of the potential sellers that could dictate the trade deadline marketas the team possesses an abundance of an otherwise scarce commodity — players who could genuinely impact the title chances of a contending team.

Two-way wing OG Anunoby has reportedly grumbled about his role in the offense, and will command a sizeable extension in the near future. All-Star point guard Fred VanVleet has yet to come to terms on his own extension, and will almost certainly opt out of the final year of his deal to enter free agency this offseason should they fail to reach an agreement. Gary Trent Jr., a career 38 percent, high-volume 3-point shooter, will also likely decline his option after this season and enter the free-agent market. If you want to think even bigger, All-NBA forward Pascal Siakam — whose contract expires after next season — might also be available if Masai Ujiri and the front office receive an offer they simply can’t refuse.

The pressure on the Raptors this trade deadline revolves around an important decision: Blow it up, stand pat, or something in between.

With reigning Rookie of the Year Scottie Barnes presumably off the table, the organization needs to decide which, if any, of Anunoby, VanVleet, Trent and Siakam are essential parts of the future. With a record middling around .500 and no money on the books past 2023-24 outside of Chris Boucher, the Raptors are a legitimate tank/rebuild candidate. All of those pieces would fetch significant assets, and the rest of this season would be dedicated to entering the Victor Wembanyama-Scoot Henderson sweepstakes. A core built around Barnes, this year’s draft pick and whichever young players they fetch in trades wouldn’t be the worst thing in the world — look at how the Utah Jazz have managed to stay relevant despite trading away two All-NBA players.

Conversely, the Raptors could decide that this, in fact, is the core built to win a title, and the first half of this season was simply a fluke that will soon be corrected. Remember that the Boston Celtics were under .500 at this time last year, before they suddenly became unbeatable and raced to No. 2 seed in the Eastern Conference and an NBA Finals appearance. Trading one of Toronto’s pieces for marginal improvements seems like a half-measure, but that’s also an option.

The point is, the Raptors have to make a firm decision, which comes with plenty of pressure.

Bottom line: The Warriors’ problems this season could be remedied through a trade, but they’d have to compromise their bridge to the future in the process.

There’s no way around it: The defending champs have struggled this season. AND recent report said that the Warriors front office isn’t expected to trade any of its three former lottery picks — James Wiseman, Jonathan Kuminga and Moses Moody — prior to the deadline, but that always comes with the “subject to change” caveat. Considering Wiseman would likely have to be in any significant trade Golden State makes, it would appear to be another quiet deadline on the horizon.

However, there is always — always — urgency to maximize Steph Curry’s window of greatness. The Warriors have gone from second in defensive efficiency last season to 14th this year, underscoring the importance of Otto Porter Jr. and Gary Payton II in that championship rotation. Of the three youngsters, only Kuminga seems marginally ready to contribute in a playoff setting, and even he’s been up and down. Donte DiVincenzo has been an excellent addition, but JaMychal Green — expected to fill in as a mobile, switchable big man — hasn’t panned out thus far.

Adding a player like Jakob Poeltl as a backup center with size (something the Warriors sorely lack unless Wiseman figures things out quickly) would likely help the defense, but they would have to get rid of Wiseman to match salary. Same if they went for a big wing like Jalen McDaniels. The Warriors could always stand pat and wait for the buyout market, but is someone like Rudy Gay taking you over the top?

Keep in mind that Golden State also doesn’t want to take on salary that would add to its massive luxury-tax bill, so anyone they trade for would likely have to be a rental on an expiring deal. Would you get rid of one of your young lottery picks for a few months of win-now help?

Most teams would say no, but the Warriors have an aging championship core armed with one of the best players in history at his peak — which makes things a little more difficult heading into this deadline, to be sure.

Bottom line: Luka Doncic is a one-man show, and it might be time to make a move as a show of good faith to a generational superstar.

Despite Mark Cuban’s insistence that he got it “dead wrong” ESPN’s Tim McMahon reported earlier this month that Luka Doncic has “strongly indicated” that he wants the Mavericks to upgrade the roster before the trade deadline. When your 23-year-old MVP candidate gets testy about needing more help, there’s pretty strong pressure to oblige. And can you really blame him?

Doncic is performing at historic levels, but the Mavs have hovered around .500 for most of the season partly due to losing his running mate — Jalen Brunson — to the New York Knicks this offseason. Dallas did not provide any reasonable backcourt replacement for Brunson, and the addition of Christian Wood has hurt the defense as much as it has helped the offense. What’s left is a Mavericks team unable to win most games unless Doncic goes ballistic — which, fortunately for them, happens quite frequently.

The Mavs have the salaries of Wood, Tim Hardaway Jr. and Spencer Dinwiddie to play with, along with plenty of available future draft picks. What that gets them, and what they’re willing to part with, remains to be seen. Can the front office convince Doncic that holding their assets for a big swing later is smarter than getting marginal help now around the fringes? Will the notoriously ultra-competitive Doncic entertain the concept of essentially punting on a season in which he’s, conservatively, one of the five best players in the NBA?

Doncic’s free agency is still far away in real life (2026), but in NBA terms it’s approaching more rapidly. The last thing you want to do is make any mistake that could eventually help push Doncic towards the door, so the Mavericks have to handle this situation delicately and wisely.

Bottom line: LeBron James doesn’t want to spend the final days of his career on a mediocre team, but the front office and ownership appear hesitant to utilize future assets to take what could be a futile shot at contention.

No matter which version you think is most prudent, it’s hard to argue that the Lakers have any chance of winning an NBA title with their current roster, so there needs to be turnover — whether it’s before the trade deadline or in free agency this coming offseason. James doesn’t seem to be willing to wait, but the fact that he signed an extension that takes him through at least next season relieves a little bit of pressure from the front office.

That being said, there is urgency. The Lakers front office showed as much on Monday, completing the first notable deal of the trade season by acquiring forward Rui Hachimura from the Washington Wizards.

James, soon to be the league’s all-time leading scorer, is averaging nearly 30 points per game and shooting almost 60 percent on 2-pointers. Davis, when he was healthy for a brief stretch, looked like the most dominant player in the league. For all the flak he’s caught for his late-game decision-making (or lack thereof), Westbrook has performed well since moving to the bench, putting up 16.5 points, 7.9 assists and 6.5 rebounds on 44 percent shooting as a reserve. New head coach Darvin Ham seems to have the Lakers playing hard on both ends. There’s something there, no matter how faintly the candle is flickering.

Trading Westbrook for Indiana’s duo of Buddy Hield and Myles Turner has seemingly been rumored since the dawn of time, and the Pacers‘ recent downslide in the absence of Tyrese Haliburton might make that deal slightly more realistic for them. The sticking point in any Westbrook deal has always been the 2027 and/or 2029 first-rounders that the Lakers would have to throw in as compensation. One point of view is that you owe it to James and to your fanbase to go all-in while he’s still performing at this level. The other side is that no deal on the table will truly make the Lakers title contenders this season, so why not hold your chips until next summer, when you also have cap space due to Westbrook’s contract coming off the books.

You can certainly see both sides, but when the King is going public about wanting to make a move, it amps up the pressure level for Rob Pelinka and Co.