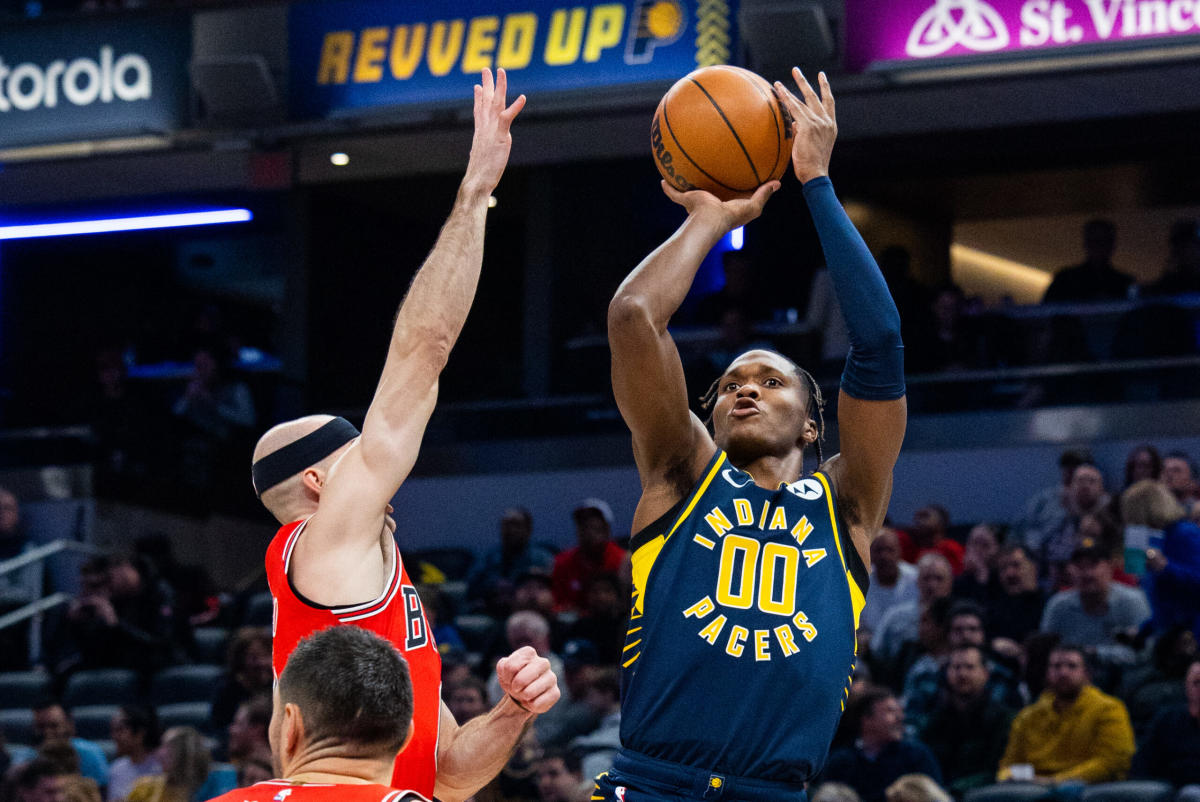 The term “rookie wall” is often used to describe how first-year players may hit a roadblock in the middle of their seasons as they adjust to the 82-game schedule and increased competition level in the NBA.

With teams well into the second half of their schedules, some rookies appear to be slowing down of late. However, there are others that are seemingly heating up at the moment and are continuing to play at a high level.

The sixth pick (more on him below) is coming off one of his best outings of the season on Tuesday to lead the Pacers to a win over Chicago. The group snapped a seven-game losing streak with the win to set up a prime rookie matchup on Wednesday against Paolo Banchero and the Magic.

To make sense of it all, we looked at the best recent performances of these first-year players and ranked them in the latest edition of the Rookie Wire Power Rankings. The rankings are not for Rookie of the Year purposes but, rather, to illustrate the best players week to week.

Williams checks in for the first time this season. He was used sparingly to begin the season but has played a major role with the team of late. Williams is averaging 7.7 points, 5.8 rebounds and 1.1 blocks on 60.8% shooting from the field in 15 games since Dec. 26. Included in that stretch: A 17-point and 13-rebound performance on Dec. 29.

The 15th pick also tied a season high with 17 points, six rebounds and five blocks on Jan. 18 in a win over the Rockets. With the performance, Williams became only the second player ever to reach that stat line in 20 minutes or fewer. After spending time in the G League, Williams appears to be settling in with the Hornets and is producing on a nightly basis.

Williams’ production has dipped some of late, but the 12th pick is still averaging 10.8 points, 5.5 rebounds and 3.3 assists over his last six games with the Thunder. He is emerging as one of the most productive rookies this season and has dazzled with his feel for the game and ability to affect games on both ends of the court. The Thunder (23-24) figure to compete for a playoff spot this year and it will be awesome to see the likes of Williams & Co. perform in high-pressure situations.

For more coverage on the Thunder, visit Thunder Wire

Statistics: 12 points, 6.9 rebounds and one assist

The Rockets have been a trainwreck, but Smith continues to show flashes on the court. He scored a career-high 27 points and eight rebounds on Jan. 13 in a loss to the Spurs, and looked great getting into the paint and finishing at the rim in that outing. The efficiency still isn’t there — Smith boasts a 50.3 true shooting percentage — but the third pick is making an impact in other areas of the game. He is dealing with a sprained right ankle and has missed the last two games, but could return as soon as Wednesday.

For more coverage on the Rockets, visit Rockets Wire

Sochan has emerged as one of the most productive rookies this season on both ends of the court. He is eighth among rookies in scoring and seventh in rebounding. His 23 games in double figures are the most by a Spurs rookie since Kawhi Leonard (2011-12).

Also of note: Hey has made tremendous strides as a free-throw shooter.

The ninth pick continues to become more comfortable on the court as the season progresses and that is resulting in some great performances. He is making great strides in all facets of the game and is emerging as one of the top rookies, as a result.

Kessler has started in each of the last seven games for the Jazz, and is averaging 11.7 points, 11.3 rebounds, 2.1 blocks and 1.3 assists over that span. He put up the first 20-20 game by a rookie since Gorgui Dieng (2014) with 20 points and 21 rebounds in a win over Minnesota on Jan. 16. He is fourth in the league in blocks among all players and leads the rookie class by a wide margin. In fact, Kessler has twice as many blocks (90) as the next-highest rookie (Christian Koloko, 45). The 7-footer is emerging as one of the most productive big men in the league and a force for the Jazz in the paint. He appears to be a steal for the Jazz from the Rudy Gobert trade and will likely be in line for plenty of end-of-season recognition.

Statistics: 8.1 points, 8.8 rebounds and one assist

Duren recently missed five games due to an ankle injury but has returned in a major way. He put up 11 points and 12 rebounds in his return on Jan. 19, and is coming off a career performance on Monday: 23 points, 15 rebounds, two blocks, two steals and one assist. He became the youngest player in NBA history to record at least 23 points, 15 rebounds and two blocks in a game (19 years, 66 days).

The 13th pick now leads the rookie class in rebounding and double-doubles (10). Although the Pistons have lost four straight and eight out of their last 10, the development of Duren and fellow rookie Jaden Ivey should be worth monitoring over the second half of the season. They will have the opportunity to play through their mistakes and continue to learn on the fly, which will certainly help moving forward.

Ivy has scored in double figures in nine straight games and is averaging 15.3 points, 6.1 assists and 4.6 rebounds over that span. He is still adjusting to playing a larger role than anticipated this season due to the injury to Cade Cunningham, and is working to limit his turnovers with such a high usage percentage (23.9).

Of course, the former Purdue standout was known more as a two-guard entering the NBA so his recent role with the Pistons will give him the chance to play both positions when Cunningham is back on the court. The fifth pick has been electric on the court and it should be worth monitoring how he can progress over the rest of the season.

Murray has been on a tear of late, and is performing at a high level. He is averaging 15.4 points, 7.3 rebounds and one assist on 46.9% shooting from 3-point range over his last seven games. Included in that span: A career-high 29 points and 14 rebounds in a win over the Thunder on Jan. 20. It was his second straight double-double effort.

The fourth pick has seemingly put any early-season shooting woes behind him and is shooting efficiently from the field now. He recently set the franchise record for games with five or more 3s by a rookie (6). Murray is playing as confidently as ever and is a major reason why Kings are up to third in the Western Conference.

Banchero continues to lead the rookie class in total scoring (780 points), despite playing nine fewer games than Bennedict Mathurin (763 points). He is still viewed as the front-runner to win Rookie of the Year, although Mathurin appears to be closing the gap a bit of late. Fans will be in for a treat on Wednesday as it will be the first time this season that the two players will square off on the court after Banchero missed the first two meetings in November.

Mathurin is coming off the aforementioned dominating performance on Tuesday to lead the Pacers to their win over the Bulls. He scored 15 of his 26 points in the fourth quarter as it was the eighth time he scored in double figures in the final period.

He is second among rookies in scoring and leads all players off the bench (769 points). He is seen as one of the two favorites in the Rookie of the Year race and perhaps the front-runner for Sixth Man of the Year. It is certainly far too early to decide either, but Mathurin is having quite a year.