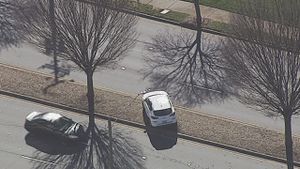 A stolen Hyundai SUV was driving recklessly through west Charlotte Tuesday morning, speeding down the shoulder of Interstate 77 and nearly crashing into several cars. Its driver and passenger escaped the vehicle after it crashed near the Mecklenburg County jail.

Charlotte-Mecklenburg police said it all started when they got a license plate reader hit for a stolen Hyundai around 10:30 am CMPD said its helicopter was able to find the SUV. The department added that officers did not attempt a traffic stop on the ground when the SUV was spotted.

ALSO READ: ‘What in the world?’: 20-mile police chase ends with stolen car on fire in downtown Morganton

Chopper 9 Skyzoom caught video around 10:40 am of the white Hyundai SUV ducking through traffic on I-77, nearly missing several drivers as it passed them. The car even drove on the shoulder to avoid traffic.

Then, the SUV got off I-77 onto Freedom Drive, turning into Bryant Park Terrace off Morehead Street. The car turned around in the apartment complex and sped away, and CMPD officers appeared to be behind it.

The SUV headed towards Uptown Charlotte, narrowly missing several drivers as it drove erratically. It drove over a median at one point, and police said it also ran multiple red lights.

Eventually, it ended up near the Mecklenburg County jail, where it slammed into the back of a box truck. The front of the SUV was heavily damaged and appeared to be smoking from the impact.

After the crash, Chopper 9 Skyzoom captured the driver getting out of the SUV and running into a parking deck across from the jail. Police said both the driver and the passenger had gotten out of the SUV.

Several CMPD units arrived at the jail, including a K-9 vehicle. From Chopper 9 Skyzoom, several officers could be seen in and around the parking garage.

Police said they were able to quickly capture one suspect in the parking deck and found the second near the crash site.

Investigators said the suspects, who were both juveniles, were taken to be interviewed. Police did not share if either suspect will be charged.

Channel 9’s Dan Matics learned TikTok videos could be behind the incident.

Investigators say instructional videos have been circulating on TikTok over the last eight months. They show people how to hot wire and easily steal a car with a USB cable.

Police said that appears to be the inspiration behind the events Tuesday.

CMPD said the number of Hyundai thefts is alarming and is the major driver of the 20% increase in auto thefts last year.

The “Kia Challenge” trend began around late June in Charlotte. Approximately 611 incidents happened through the end of the year, including actual thefts and attempted thefts, CMPD said. 56% of the stolen vehicles were recovered.

Thieves nationwide have targeted Hyundais and Kias to exploit a manufacturing defect. Those vehicles don’t have an “engine immobilizer” — basic technology that has been around since the 90s. Now, it’s the crux of dozens of lawsuits.

Matthew van Fleet is the lead attorney on one class action suit.

“They’ve advertised these cars as being world-class with cutting-edge technology and obviously, that’s not the case,” he said.

Hyundai Motor America said they’ve made engine immobilizers standard on all vehicles produced as of November 2021. They said there’s also a software update scheduled to be available beginning in March which will be provided at no cost to customers.

Lawsuits claim some customers were told they could have an immobilizer installed on their vehicle for around $150 — not including installation.

“Oh by the way, you’ll have to pay for the cost of the installation and that cost is going to exceed $500,” van Fleet explained.

TikTok has said they do not condone the behavior in the videos because it violates their policies. They’ve been working to remove the videos from the platform.

This is a developing story. Check back for updates.