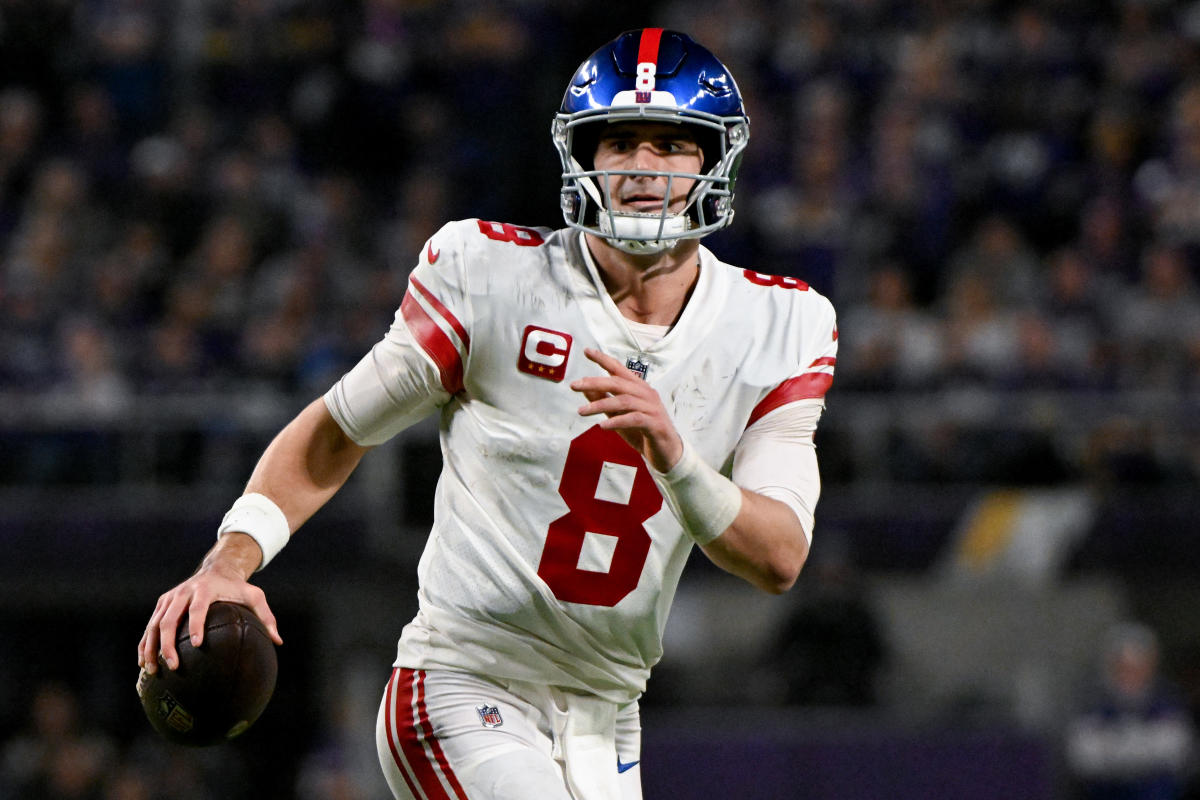 That lower play-action rate is notable because Daniel Jones was at 34% in the regular season. Only Tua Tagovailoa, Lamar Jackson and the Falcons quarterbacks checked in higher among passers to play 10-plus games.

Jones didn’t need the play-fake as much; he sliced ​​through the Vikings defense with ease on traditional dropbacks.

The Giants made great use of Isaiah Hodgins on option routes as a slot receiver. Normally a pure perimeter player, Hodgins caught all five of his targets when lined up inside and managed 2.72 yards per route run. That guy can play.

The Giants showing another dimension on offense came at a perfect time, because the Eagles defense has been one of the most effective units against play action:

Philadelphia is a quality defense with strengths at multiple levels. When they were weak upfront, Howie Roseman went out and signed big-men veterans like Linval Joseph and Ndamukong Suh to plug the middle. They have two stars at outside corner thanks to the offseason addition of James Bradberry. It’s tough to find a weakness in this unit.

However, if you’re looking for a spot to attack, go right back to the slot.

Nickel corner Avonte Maddox is out for this game; he got hurt against Dallas. You know, the game where the Cowboys just bludgeoned the Eagles with CeeDee Lamb slot routes.

That should benefit Jones, who’s been thriving in the dropback pass game — without play-action — and adding another layer to his comeback-esque breakthrough season.

The Eagles will prove a much tougher test than Minnesota, but Hodgins might be up to the challenge of assisting Jones. If we see more slot work from the upstart receiver, this sneaky duo could find success once again in the postseason and go a long way to pulling off an upset.

The Giants blitzed on just 15% of dropbacks against the Vikings

Let’s continue the theme of Giants’ counterpunches. Much like the offensive stat above, this was a steep departure from the Giants’ norm, perhaps to an even greater extent.

Giants defensive coordinator Wink Martindale has been a blitz-happy, physical-man-coverage play-caller and designer forever. That tiger doesn’t change his stripes. The Ravens had to move on from Martindale and this brand of football because they couldn’t allow themselves to get filleted by Joe Burrow and those receivers twice a season for the next decade.

So it was remarkable to see Martindale take a swift left turn to deal with a challenging assignment.

No team played more man coverage than the Giants this regular season (40.5%), but during their playoff win over the Vikings, New York used zone coverage on 76.8% of dropbacks. Altering the coverage and calling off the blitz dogs was specific to covering Justin Jefferson. Deploying three-deep looks and a ton of quarter coverage instead of heavy man and brackets worked as an adjustment.

I’m skeptical Wink and co. run this exact plan back against the Eagles…but it might be better than the alternative.

Jalen Hurts’ injury caused us to forget just how lethal this Eagles offense is at its best. It’s uniquely suited to demolish this traditional Martindale variety of defense and not just because we know quarterbacks who thrive against man-heavy stop units.

AJ Brown has been one of the best man- and press-coverage-beating receivers in Reception Perception each of the last three seasons. He’s shown this year if you line up against him in single-man coverage, he and Hurts will dunk on you with go routes. However, if you dedicate any sort of true bracket or double-team to Brown, you’re asking to be cut up by DeVonta Smith. The Eagles’ 2021 first-round pick was electric this season with some massive games down the stretch.

He’s a legitimate WR1 by any measure, he just plays across from another big-time alpha.

We haven’t seen the combination play at its peak in a while but don’t forget that the Hurts-to-Dallas Goedert connection on tight end screens has been absolutely money, too. Goedert averaged 10.3 yards per target on screens this season and an absurd 14 yards after the catch per reception. That’s just another way Philly can beat the blitz.

The Giants have already shown they can counterpunch and Martindale can change his stripes defensively. He should be going with something closer to what we saw last week, not his usual ways, in the divisional round.

Analyzing the Chiefs’ defense is always tricky this time of year. Coordinator Steve Spagnulo has long been a game-plan-heavy coach when the postseason hits. He knows what offense he plays with. Spags knows he can save the heaters for these games.

Looking at the unit that took the field during the regular season, if the pressure didn’t get there, they had problems.

Chris Jones is having a Defensive Player of the Year type season. He probably won’t win the award, but he needs to be discussed. He could be a game-wrecker all by himself against Jacksonville. If Jones doesn’t come through, the Jags have players to prey on KC’s tackling issues.

The Chiefs have largely shored up their slot coverage with some personnel choices but have issues with tight ends. Evan Engram has been a monster when you get him in the open field. Doug Pederson has used him perfectly in this offense. I’d look for Engram to be a big factor in this game and potentially sail past his 44.5 receiving yards prop.

I’ve always been a bit skeptical that Kadarius Toney ever develops into a full-time, true wide receiver. He just has a long way to go as a route runner. However, he has truly rare movement ability in the open field as a playmaker.

The Chiefs have wisely not been messing with many of his route details, instead just letting him go to work. The above stat shows that Toney isn’t on the field often, but when he is, it’s a priority to get him the ball. Essentially, he’s a gadget player. That’s a good fit.

Even if there isn’t some grand ramp-up for Toney or an unleashing of him as a starter — again, I’m skeptical of any of that — he can play a huge role in this game. The way the Chiefs have deployed him on sweeps and simple flat routes gets him where he belongs out in space. I like him to at least rip off one big crucial play in this matchup.

Joe Burrow had a 5.8 YPA under pressure against the Ravens

The Bengals went to the Super Bowl with a bad offensive line last year. They’ve proven they can overcome poor pass protection. However, I’d argue the group they’ll likely roll out on Sunday is worse than what they played with during 2021.

Left tackle Jonah Williams isn’t going to play. Neither is an offseason addition Alex Cappa. Right tackle La’El Collins is he IR. This unit is compromised.

The Ravens defense was pitching heaters against the Bengals last week. They played plenty of two-high, deep safety looks and got pressure with four guys. Baltimore blitzed on sub-11% of dropbacks.

The Bills defense has not been quite at peak form this year and has dealt with injuries on the back and front ends. However, they still have more than enough guys who can pressure the quarterback and play opportunistically in the secondary.

If the Bengals offense stalls out in this game, the root will begin at the offensive line.

Translation: Josh Allen has got to settle down a little bit.

The Dolphins were able to stay competitive with Buffalo because Allen kept taking unnecessary sacks, turning the ball over and compounding mistakes. Miami’s defense deserves a ton of credit, but Allen has made his life difficult more than once this season. It’s not a new thing.

Allen is playing normal drives like a two-minute drill. He’s big-play hunting and passing on open check-downs. I can’t blame Allen for reading deep routes first considering he has one of the best wideouts in the game Stefon Diggs and a proven big-play threat in Gabe Davis on the other end. But he needs to get to the check-down or scramble faster. The offense is too chaotic otherwise.

The plays are there. Ken Dorsey has built functional check-downs into the offense. Allen just needs to take them.

One possible solution for settling Allen down would be designed quarterback runs. We haven’t seen Dorsey unleash Allen as a designated runner in quite some time.

It’s the playoffs. If there was ever a time to let it rip, it’s now.

There are no two ways about it, we got a fantastic performance out of both Kellen Moore and Dak Prescott on Monday night.

The 49ers will prove a much tougher test on Sunday. They’ve absolutely bottled up offenses on the regular this season. However, if the Cowboys get that version of Prescott, they can beat anyone. They can win the Super Bowl.

For the Cowboys to take home the win in San Francisco, they just need to completely put the game in their quarterback’s hands. Every non-red zone Ezekiel Elliott condensed carry will be a waste of time. Spread the field and attack.

The Cowboys got too far away from their superstar players in the 49ers playoff game last season. Not enough CeeDee Lamb Or Tony Pollard. Moore can’t make that mistake again.

Dallas has the lane for an upset here if they get the best out of their passing game. They just have to set the pins up and knock them down.

Almost one-third of Brock Purdy’s attempts against the Seahawks went to targets that had at least 5 yards of separation, per Next Gen Stats

The 49ers offense is a dream. It’s full of homegrown talent with a superstar sprinkled on top Christian McCaffrey. Kyle Shanahan is a proven high-level play-caller who has figured out the mix with this particular cast.

Every target feels like it’s going to a wide-open, college football type of window. The data shows that’s true. The spacing is unreal.

I don’t have some sizzling Brock Purdy like that. He’s been good within the context of the offense. I do think he’s added layers to the passing game as an outside-the-numbers aggressor that Jimmy Garoppolo didn’t. He’s also a plus scrambler.

He has a comfortable incubator playing for this team, but he’s crushing the assignment. Dallas is objectively the best defense he’ll have faced, but there are holes to pick in this stop unit, especially at the second corner position. As long as Purdy can withstand pressure, he’ll be able to have his moments.