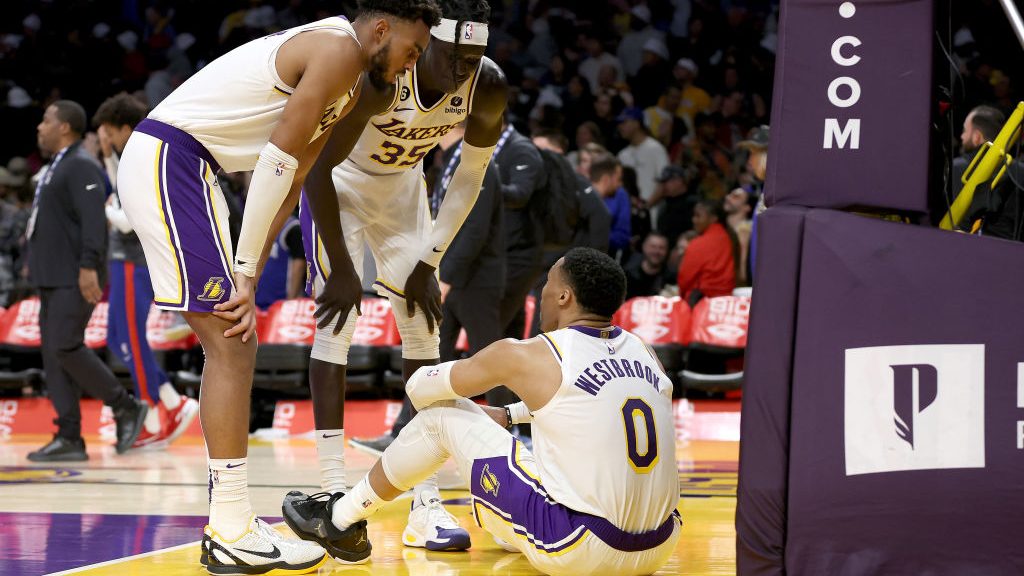 LOS ANGELES — Three Things To Know is NBC’s five-days-a-week wrap-up of the night before in the NBA. Check out NBCSports.com every weekday morning to catch up on what you missed the night before plus the rumors, drama, and dunks that make the NBA must-watch.

There are more positives than negatives with the Russell Westbrook experience recently in Los Angeles… but oh, those negatives leave a mark.

Westbrook brings energy off the bench the Lakers need nightly. Sunday night against Philadelphia he had his fourth triple-double off the bench this season (20 points, 14 rebounds, 11 assists). He’s had improved chemistry with LeBron James of late, which showed with two key buckets late in the first half Sunday.

Even defensively, Westbrook made a play. With the 76ers up one and less than :30 seconds remaining in the game, he got switched onto Joel Embiid played solid defense, not getting bullied in the paint and pushing Embiid to take a fade-away jumper that hit the front of the rim.

Then came the negatives.

Westbrook got the rebound off that Embiid missed, brought the ball up, and never looked to LeBron — who was the best player on the floor in the game, scoring 35 points with 10 assists — instead deciding he would isolate in a cross-match against Joel Embiid (a guy who gets mentioned in Defensive Player of the Year conversations). Westbrook fumbled the ball a little, gathered it, then time was running out so he drove left, couldn’t get by Embiid and the help defense of Georges Niang, and put up what he said was a shot but almost looked like he wanted to skip pass it Troy Brown Jr. in the opposite corner. Whatever it was, Niang was officially credited with a block and, for the second straight gamethe Lakers lost in the clutch.

Westbrook said he was fouled on that final shot attempt, even showing a few reporters around his locker a photo as evidence.

“I was trying to attack and get to the basket. Unfortunately, he was grabbing my wrist. I couldn’t get the ball up,” Westbrook said. “But it’s all good.”

Embiid denied that he fouled Westbrook (and countered that Westbrook had fouled him on the other end, but these things don’t get called late in games).

It may have been a foul by the book, but it was a subtle one in real-time and the kind of thing rarely called in the final seconds of a game. The bigger question was the decision to let Westbrook isolate on Embiid in the first place — why didn’t LeBron James touch the ball? Why didn’t you coach the Lakers? Darwin Ham call a time-out (the Lakers had one) and set up a play?

“Just being down one point in the ball in Russell Westbrook’s hands, I’m comfortable with that. I don’t know how much I can reiterate that,” Ham said postgame. “If that was Bron it’d be the same thing, and we don’t want to bring an extra body over… if we got cross-match within Embiid in front of us again, we just got to make it. We just got to finish the play. That’s it.”

It was the second straight game the Lakers couldn’t get a stop when they needed it, couldn’t get a last bucket when they needed it, and lost in the clutch. The previous loss was to Dallas, this one to Philadelphia — both top-five teams in their conference — but the Lakers are past the point in the season where they can have moral victories. Los Angeles is five games below .500 and sits 13th in the West.

“I know when we have our team together, when we lock in, we’re a really good team,” Westbrook said.

The Lakers’ biggest highlight of the night came in the first quarter, when with a 20-foot straight-on jumper LeBron became only the second player in NBA history to reach 38,000 points.

After this game LeBron is just 364 points shy of the once thought unbreakable NBA all-time scoring mark of Kareem Abdul-Jabbar. LeBron is on pace to set the record around the All-Star break in February.

It wasn’t pretty. Not the Nuggets’ second half (they led by 15 at halftime), nor the final play itself.

It didn’t matter — Nikola Jokic bailed the Nuggets out with a step-back 3 game-winner to beat the Magic on Sunday.

It was a league-leading 12th triple-double for Jokic, who finished with 17 points, 10 rebounds and 14 assists. Aaron Gordon led the Nuggets with 25 points on 9-of-13 shooting.

In his revenge game against his former team Bol Bol had 17 points off the bench for the Magic.

Martin Luther King Jr. Day is a day about things far more important than basketball — a chance to reflect on one of the great leaders America ever produced, and the ongoing struggle for the justice and equality he preached.

But it is also a day the NBA has embraced and celebrates with an impressive slate of games.

There are nine games on the day, but three that should draw your attention in particular.

• Pelicans at Cavaliers (3 p.m. Eastern, NBA League Pass). New Orleans will be without Zion Williamson and Brandon Ingram, thigh CJ McCollum and companies have still been finding ways to keep their head above water and win some games until their stars return. Getting a win will not be easy against the second-best defense in the NBA (led by Jarrett Allen) and the unleashed scoring machine that is Donovan Mitchell in Cleveland.

• Miami Heat at Atlanta Hawks (3:30 p.m. Eastern, TNT). Atlanta is a special place on MLK Day, the city where he was born and raised (if you’re there, the Martin Luther King, Jr. National Historical Park is a must visit). The Hawks celebrate that legacy well — and they need a win. This is a struggling franchise that has seen a front office shakeupthey are trying to trade one of their stars (John Collins), and the fit of Trae Young and Dejounte Murray has not been smooth all season. Into town comes a Heat team that has won three in a row — sweeping a couple of games against the Bucks — and looks like it is finally starting to find its footing (if they can just stay healthy and keep their stars on the court).

• Phoenix Suns at Memphis Grizzlies (6 p.m. Eastern, TNT). Memphis is where Martin Luther King Jr. was assassinated, and it’s home to the National Civil Rights Museum — another city where the MLK Day events are not to be missed. Memphis is also home to Ja Morant, the most entertaining player in the NBA today, and a Grizzlies team that is finally mostly healthy and starting to play like a contender. They host a Suns team that has struggled mightily without Devin Booker (who remains out), but still can be a threat when Chris Paul and Deandre Ayton get rolling.

The other games on the NBA slate today are Celtics at Hornets, Pacers at Bucks, Raptors at Knicks, Jazz at Timberwolves, Rockets at Lakers.