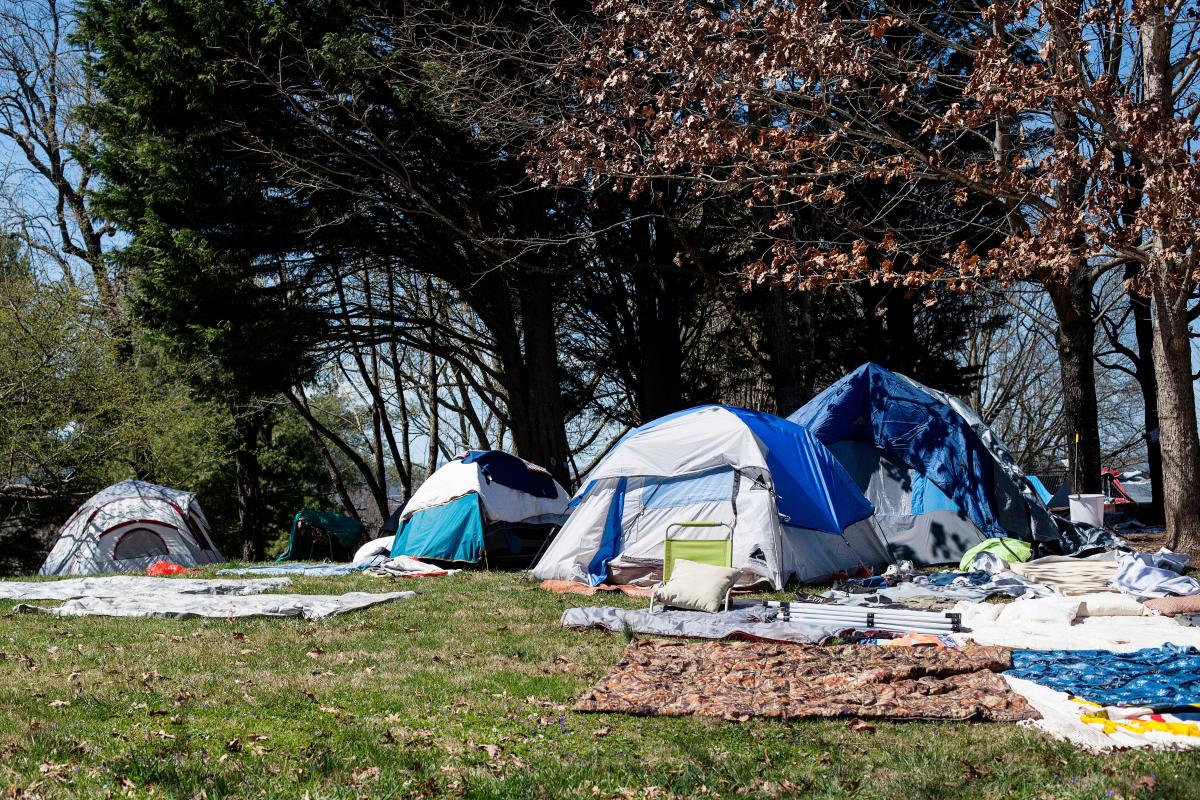 ASHEVILLE – The American Civil Liberties Union of North Carolina, Freedom of the Press Foundation and Committee to Protect Journalists have petitioned the Buncombe County Superior Court for release of police body camera footage from Dec. 25, 2021, the night two Asheville reporters were arrested while covering a homeless camp clearing in Aston Park.

Last winter, Aston Park was the focal point for a number of sanctuary camp demonstrations that culminated in the arrests of six individuals, including Asheville Blade reporters Matilda Bliss and Veronica Coit.

The short filing, a copy of which was obtained by the Citizen Times, is dated Jan. 24.

Seth Stern, director of advocacy for Freedom of the Press Foundation, a New York-based nonprofit, told the Citizen Times that the “most important factor” of the 182-page petition is the public interest in the footage.

“One, it relates to a controversial eviction on Christmas night of homeless people from a public park. The fact that police conducted that operation, in it of itself, is of very significant public interest, and has been the subject of media coverage, public debate and comment and extensive local controversy,” Stern said.

“But when you add to that that the police took the extremely rare step of arresting two journalists, and journalists who had previously been critical of the police on this specific issue of encampment sweeps, that magnifies the public interest. And not only were the journalists arrested, but they’re being put on trial, which is exceedingly rare.”

In January, Stern wrote a guest op-ed in the Citizen Times calling for prosecutors to “drop retaliatory charges” against the Blade reporters.

Asheville police did not immediately respond to a request for comment.

Bliss and Coit are charged with misdemeanor second-degree trespassing. Classified as a Class 3 misdemeanor, the charges carry a penalty of up to 20 days in jail or a $200 fine.

According to arrest reports, the individuals were arrested Dec. 25 around 10:45 pm The city park closes at 10 pm The four people arrested who were not members of the press were also charged with resisting a public officer.

The trial of Coit and Bliss was set to begin Nov. 21, but was continued until Jan. 25.

In Jan. 24 statement to the Citizen Times, Bliss said the petition filing was a continuation of Blade’s advocacy for transparency and attempts to alert the public to what they have witnessed, “whether it was the violence against the unhoused, against locals exercising their rights to protest, or against us for reporting on those camps and protests on Christmas night.”

“If Asheville government and police are going to carry out such violence as removing camps of unhoused people during a pandemic and eviction crisis, they shouldn’t be afraid of the public seeing these actions and holding them accountable,” Bliss said.

On Jan. 24 news release from the ACLU of NC said the petition argues that disclosing the footage is compelling to public interest “due to potential misconduct by law enforcement while evicting unhoused people from public parks.”

“At stake in this incident is public trust, freedom of the press, and police accountability,” said Muneeba S. Talukder, Staff Attorney at the ACLU of NC, in the release.

“We know that, especially now, all police conduct is of great public concern. The need for transparency is even more pressing in this case because the journalists were arrested while gathering and attempting to share news on the eviction of unhoused people from a city park.”

The petitioners are seeking “unrestricted” release of all police body camera footage related to the arrests of Bliss and Coit. According to details included in the court filing, they have found only three trials of journalists arrested while gathering news since 2018, and quoted a prior case, “noting that ‘the chilling effect upon the exercise of First Amendment rights may derive from the fact of prosecution, unaffected by the prospect of its success or failure.'”

The petition for body camera footage is not ACLU of NC’s only ongoing work in Asheville. They are also challenging park bans issued to 14 individuals, all mutual aid volunteers, who were issued park bans after the protests at Aston Park the week leading up to Christmas Day. Also following the protests, 16 individuals were charged with felony littering. Five of those cases are going to trial in February.

ACLU of NC, FPF and CPJ are requesting a hearing as soon as possible, and request that the court order the public release of the unedited body camera footage of the events of Dec. 25, 2021.

This story will be updated.

Sarah Honosky is the city government reporter for the Asheville Citizen Times, part of the USA TODAY Network. News Tips? Email shonosky@citizentimes.com or message on Twitter at @slhonosky.