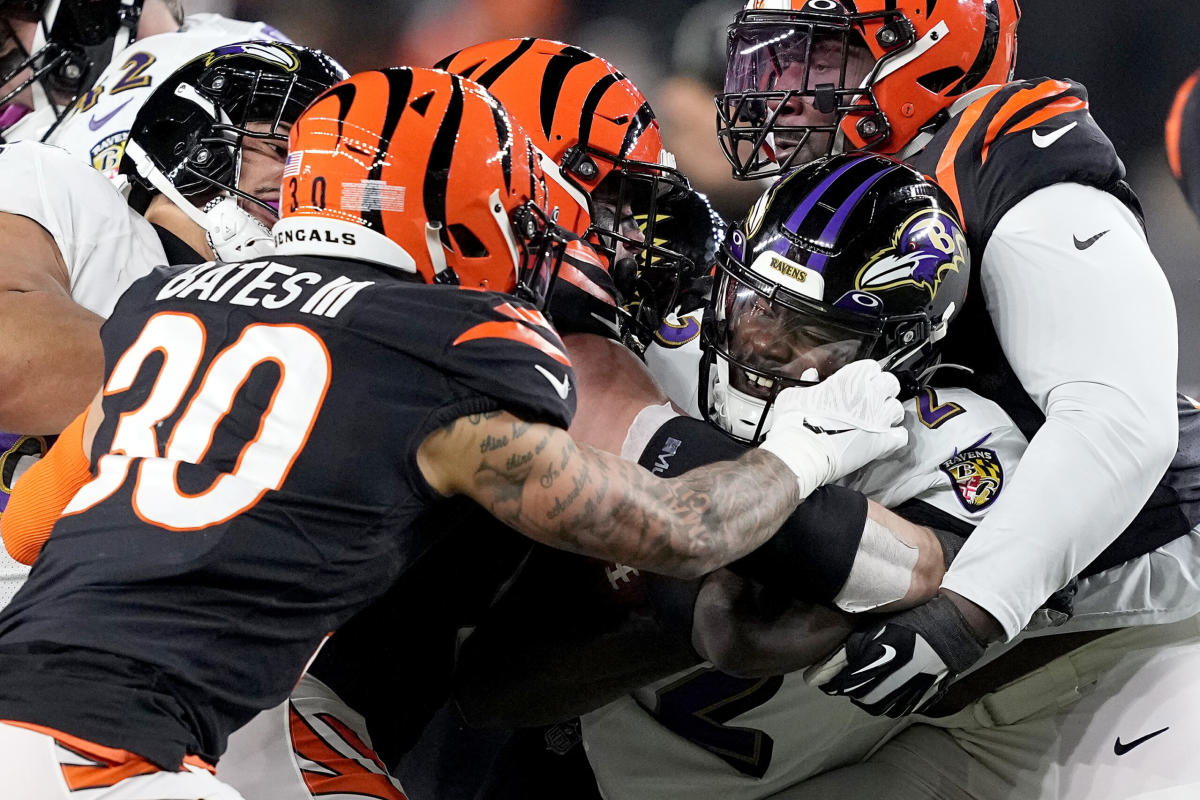 The Cincinnati Bengals survived the Baltimore Ravens in the opening round of the playoffs in a nail-biter that came down to the very last play.

It was a predictably ugly AFC North slugfest in the first half with the expected chippiness between rivals as the team fell behind 10-9 by halftime. But with the game tied at 17-17, Bengals defensive end Sam Hubbard made NFL history by scoring a 98-yard touchdown on a fumble return.

That means the Bengals are through to the divisional round to play the Buffalo Bills on the road.

Before the prep for that game begins, here’s a look at takeaways and things to know from Sunday night’s classic.

The Bengals just aren’t catching a break in this area now. Left tackle Jonah Williams went down in the first half and didn’t return. Starting cornerback Eli Apple also went down before the break and eventually did.

Cincinnati couldn’t afford any more injuries to the line, not with Alex Cappa and La’el Collins already missing from the right side. Jackson Carman entered the game in Williams’ place.

Evan McPherson missed another extra point, this time after the first touchdown of the game. That led to a halftime deficit of 10-9 instead of being tied at 10. The mixups to the process by swapping out long-snapper Clark Harris for Cal Adomitis and also making a change at holder didn’t help things. But by playoff time, the excuses have to stop.

The Bengals had far too many apparent short stops go for big chunk gains, like a Gus Edwards three-yard pass busted out for 15 or more yards. Bad gap management, poor angles and rough tackling were often the culprits. That’s not usually what the defense looks like and some of it is simply attributed to Baltimore’s offense being so unpredictable.

This one deserves its own note. Carman entered the game in place of the injured Williams and was solid on his first drive. It’s noteworthy because Carman played left tackle in college but never really got the chance in Cincinnati because nobody wanted to move Williams out of that spot. Carman eventually ended up struggling, especially against speed rushers as the Ravens seemed to figure out what would work against him. But it should be interesting to see if the Bengals keep him there or move him around and shuffle at least one other guy (Hakeem Adeniji? Isaiah Prince) in an effort to improve.

One has to wonder how much of the struggles for the Bengals on Sunday night were simply the typical AFC North wackiness. Baltimore had the best defense the team will see all postseason in the conference and knows the Bengals quite well. Injuries to the offensive line hurt the offense and the defense was dealing with a multiple look they’re not used to and a career game from Tyler Huntley.

So the question is: Do some of these issues go away against an uncommon opponent? The Bengals will have a week to adjust the offense to accommodate the injured line and the defense will have time to make adjustments and unexpected tweaks.

One thing’s for sure — all phases need to be better in order to beat a team like the Bills and advance to the AFC title game.

Notes as the game unfolded

— Burrow started the opening drive 5-of-5 then ended 0-of-3, going 14 plays and more than six minutes of game clock before an Evan McPherson field goal. Not bad and established the run, but it was clear Burrow might need to get out of the pocket more.

— Akeem Davis-Gaither cut off a pass intended for Mark Andrews and intercepted it on Baltimore’s first drive. Tyler Huntley just never saw him.

— Ja’Marr Chase torched Marcus Peters down the field after the interception, catching five passes and capping it off with a seven-yard touchdown.

— Another red flag for special teams: Evan McPherson missed the extra point, making it 9-0 instead of 10-0.

— Bengals defense gave up a 17-play touchdown drive, 12 of those on the ground. That’s a big red flag on its own, as it’s the exact game the Ravens wanted to play and what could let them pull off an upset.

— Yet another red flag — left tackle Jonah Williams suffered a knee injury and that put Jackson Carman in the game.

— Big four-point swing by the Bengals defense by preventing a touchdown at the end of the half. That meant being down 10-9 instead of much worse.

— Out of the halftime tunnel, Bengals offense looped in some new things like pistol formations and play-action to go the length of the field for a touchdown, a short Burrow rush. Burrow then hit Tee Higgins for the two-point conversion.

— Of major notes? Carman looked solid at left tackle on his first drive, his natural position in college. Might be something to watch closely.

— Eli Apple got cooked on a deep Ravens touchdown, biting on what he thought would be a short throw. That tied the game at 17 — the most points the Ravens have scored in a game since losing Lamar Jackson in early December.

— One of the wildest plays onlookers will ever see: Sam Hubbard scored a 98-yard touchdown in a stunning game-changing play.

— Three straight punts for the Bengals offense while having a chance to close the game out. Not unexpected given the Ravens defense and needing to change things because of injuries. But the offense needed the defense to carry the second half and key moments.