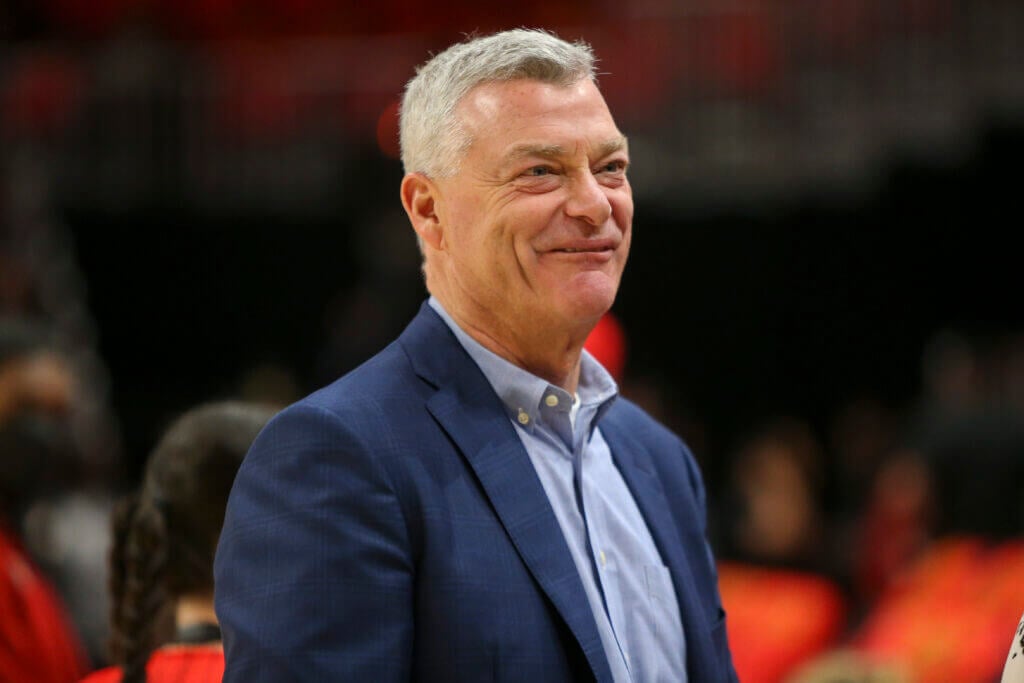 ATLANTA — Sports has shown us there are several ways to win. A team can win with great players and an average coach, or even average players with a great coach. It can win with a general manager who excels at squeezing the last breath out of every nickel, or one who is green-lighted by his owner to spend money freely, or one whose drafting and player development system is so good that there’s no need to do a swan dive into the deep end of the free agent pool.

But there’s one thing a sports franchise can’t overcome: flawed ownership. So let’s start there with the Hawks. Let’s start at the top with Tony Ressler, because this franchise’s spiral effectively starts and ends with him.

Ressler is a heavily invested owner (that’s good) whose fan-like, hyper-emotional ups and downs have impacted the team in a negative way (bad). He has helped turn a once-rising franchise into a dysfunctional mess, experiencing the same painful learning curve that Falcons owner Arthur Blank did. Blank was driven to succeed but he so lacked objectivity early and often that he enabled Michael Vick and spoke of “lifetime” contracts for Matt Ryan and Julio Jones, effectively undercutting his front office.

A lot has been written over the past several months, and certainly in recent days, about the Hawks’ dramatic fizzle from a team that reached the 2021 conference finals and was viewed as a blueprint for building the right way to one that sits in only ninth place in the Eastern Conference standings. There may be a glimmer of hope. The Hawks led the Heat by 26 points in the first half, let that lead almost predictably shrink to four in the final quarter, but held on for a 121-113 win Monday.

They’re back to .500 (22-22) for the first time in three weeks. They’ve won three straight for the first time since early November. But small sample size. Hold off on declarations, especially against the backdrop of so much turmoil.

Many have taken punches for the fall since the 2021 playoffs: Trae Youngwho has the talent but at times seems to lack the maturity and leadership skills for someone of his status; coach Nate McMillan, who has had his share of frustrations with Young and likely is coaching for his job the rest of the season; former general manager and team president Travis Schlenk, who in late December was suddenly moved to the obscure role of “senior advisor,” which is generally what teams do when they don’t want to just fire someone for reasons of appearances, especially with so much time left on someone’s contract; Nick Ressler, an otherwise obscure employee in the organization except for the rather important fact that he was the owner’s son and had become an increasingly prominent voice over the last two years.

About Nick Ressler: The Hawks are going to great lengths to try to smother the narrative that the 27-year-old with no basketball experience has exerted major influence over decision-making. He’s just a “voice in the room,” they say. (Just a voice. OK. And right now I’m imagining a job interview with someone in human resources saying, “Hey, I see your last name is Ressler! Are you any relation? Because that might help you!”)

But let’s put young Nick aside because this is more about his father.

Tony Ressler is emotionally and economically invested in his team, which is what any fan should want. He and his wife Jami Gertz drive more social causes than any other Atlanta sports executive. He also orchestrated the renovation of State Farm Arena (albeit with public money) and the construction of a needed practice facility. But Ressler has acknowledged his lack of patience and blind spots in the past, calling himself “the schmuck in the room” for mistakes that included the promotion of former coach Mike Budenholzer to team president.

It seemed he had learned.

Many viewed the Hawks’ run to the Eastern Conference finals two years ago as a bit of an aberration. The Hawks were an ascending franchise but not really at that level, yet. But Ressler saw it as an accurate barometer of where the team was. He became increasingly involved in basketball operations, as is his right. But when elevated expectations weren’t met last season, he mandated changes. Schlenk became the “big picture” guy. Landry Fields was elevated to general manager, in charge of the day-to-day. Ressler began listening to the wrong voices, including his own, and involved himself in basketball transactions. He rejected a trade that would have sent forward John Collins to a Western Conference team because he didn’t want to break up the core, a league source said.

All in the front office agreed that the Hawks needed a second scoring option with Young. But ace The Athletic’s Sam Amick reported in his thorough analysis about the Hawks’ front office dysfunctionSchlenk wasn’t comfortable trading three first-round picks to the Spurs for Dejounte Murrayeven though he liked Murray as a player.

Truth is, anyone who had followed Schlenk in his career knew that kind of trade did not align with his philosophy. But others in the front office disagreed. Fields rejected any notion that the Hawks were mortgaging the future, telling The Athletic, “You have to take some risks. What’s the famous Jimmy Johnson quote: ‘You can’t play with scared money’? If I were to go back I would do that trade 10 times out of 10.”

The owner agreed. He effectively made the decision. Murray has generally played well, but Fields acknowledges the chemistry between him and Young isn’t there, yet. There’s a question whether it ever will be. The trade also effectively forced Atlanta to deal a valuable guard Kevin Huerter in a salary dump to avoid paying a luxury tax penalty.

The Young-Murray pairing may eventually work out. But that’s not today’s view. Even Hawks CEO Steve Koonin called Amick’s story “fair,” in a radio interview on 92.9 FM.

Today’s view is one of a cap-bloated team that is short three first-round picks and sits only ninth in the Eastern Conference standings.

Today’s view includes an inexperienced front office and a frustrated head coach trying to put a team back on the rails.

Today’s view is one of a team scrambling just to make the playoffs, effectively putting Fields in a position of weakness in trade talks.

Things were working so much better when just basketball people were making the decisions.

Ressler declined an interview request by The Athletic.

He released a statement that referenced only Fields and new assistant general manager Kyle Korver: “I am extremely supportive of Landry and Kyle’s leadership and vision for our basketball operations. They are committed to building a highly communicative, player-friendly and innovative front office that makes collaborative decisions. I believe in them and will make sure they have the resources they need to make us a winner.”

That all sounds great. But if the rest of the season goes south, don’t be shocked if Ressler pushes reset again and tries to hire a new president of basketball ops, along with firing McMillan. It seems to be in his DNA.

The Hawks’ front office is now led by an odd mix: Fields is 34 years old. Korver was a highly respected player but is new to management. There’s also a cap guy who’s a friend of Nick Ressler and a pro scout who worked for a Bay Area media outlet who’s a friend of Fields. Meanwhile, three respected members of Schlenk’s personnel staff were fired.

Fields understands why people might look sideways at the new front office.

“Even from my seat, I understand there’s not a ton of experience,” he said The Athletic. “I was born in 1988 — I can’t help that. But I take full ownership of our group. Just because somebody has all those years of NBA experience doesn’t necessarily make them wise. I’m not knocking experience. I understand there are certain things you just don’t know and to have people around who do know those things will be very helpful. We still have people on board who have a lot of experience.”

He referred to the media focus on the Hawks’ problems as “distractions,” adding, “I think we’re still in good shape, but this is just part of our story this year that we’re going to have to work through.” But I get it. There was a transition midseason and that’s always going to prompt questions and stories.”

Fields addressed the team after Schlenk stepped down, telling players and staff his expectations. He said if anybody had a problem with that, he would try to accommodate them with a trade.

“Some people don’t want to be a part of change and transition, and I want to honor them in that process,” he said.

Fields maintains no player (or agent) has asked to be traded, but that shouldn’t be taken as a sign that the Hawks will be quiet at the trade deadline. The Hawks have been trending downward for two years and this won’t be an easy fix. At some point, Ressler must learn that even a billionaire who excels at running a private equity firm is a novice when it comes to running a sports franchise.