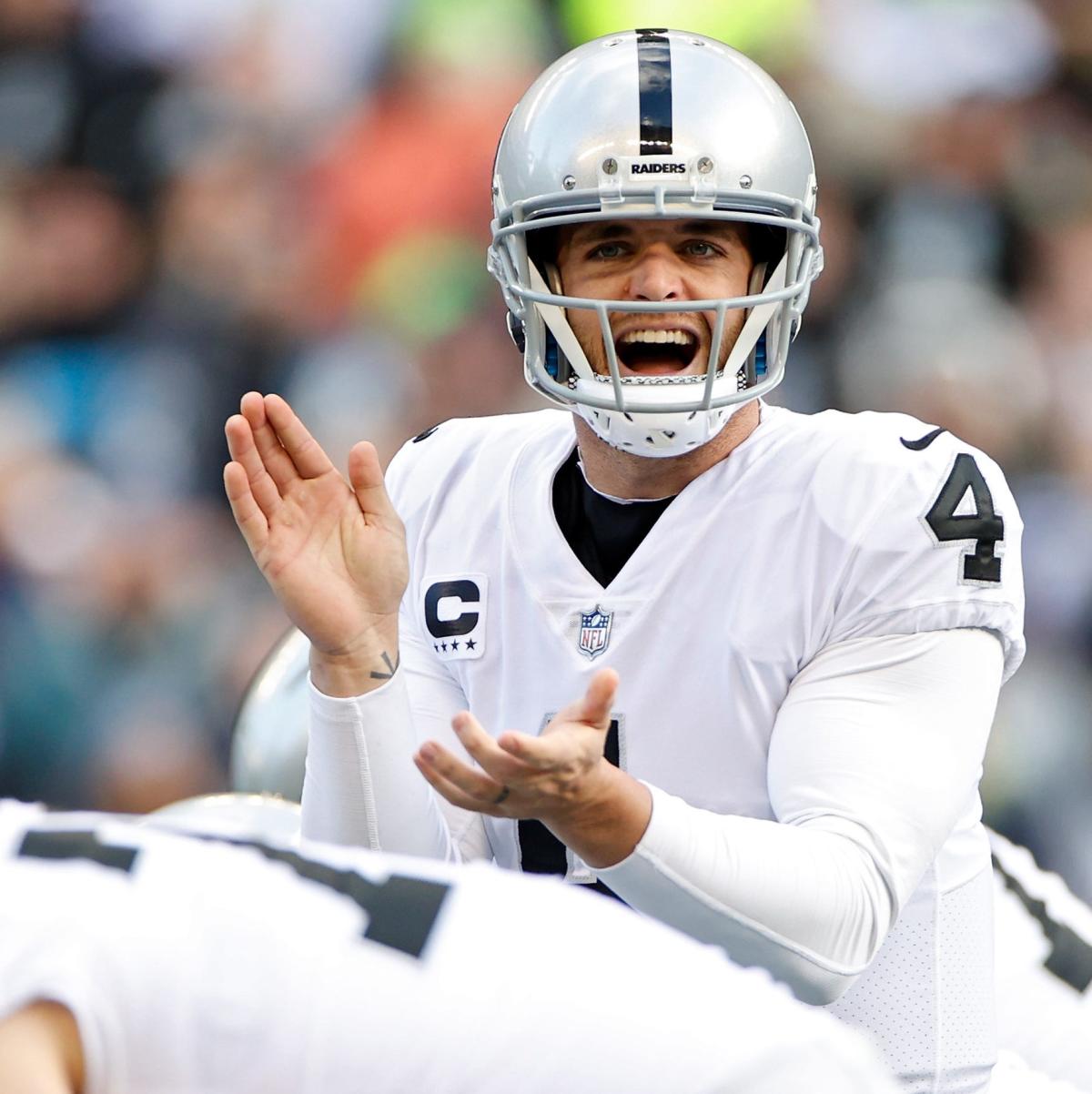 Derek Carr signaled his impending departure from the Las Vegas Raiders this week, an outcome that seemed a foregone conclusion when he was benched for the final two games of the 2022 season.

“I once said that if I’m not a Raider I would rather be at home and I meant that, but I never envisioned it ending this way,” he wrote on Instagram as part of a goodbye post to Oakland, Las Vegas and Silver and Black fans.

“That fire burning inside of me to win a championship still rages. A fire no man can extinguish; only God. So I look forward to a new city and a new team who, no matter the circumstance, will get everything I have. Winning a championship is what I’ve always wanted and what I will continue to work towards.”

“Derek Carr, he’s said for a long time that, ‘I’m only going to play for the Raiders – it’s going to be Raiders or no one else.’ So that’s loyalty,” David Carr said on NFL Network following his brother’s demotion.

“It wasn’t Derek that changed, right? It was the Raiders that changed. So, when I go forward with Derek, that conversation about him being retired a Raider is no longer an option. He’s playing football again. He’s reinvigorated, he’s excited to go out (elsewhere). So the Raiders are going to seek a trade … and they’re going to listen.

“And he’s going to look for teams that have a stable situation between their head coach and their ownership. Stable. He’s also going to be looking for a team that is also looking for a quarterback that has a reputation for game-winning drives and fourth – quarterback comebacks. I’m excited, maybe he’s the missing piece for someone. We’ll see what happens, I’m excited for my brother’s future.”

Lots of breadcrumbs there.

And consider: Carr holds the preponderance of leverage regarding his future. The three-year, $121.5 million contract extension he signed in April contains a no-trade clause. The Raiders will only incur a $5.6 million cap hit by cutting Carr – but they must do it by Feb. 15, otherwise they’d owe him more than $40 million in guarantees.

Bottom line? He’ll almost certainly be a free agent shortly after Super Bowl 57 – unless the Raiders are able to engineer a deal with a team Carr wants to play for.

So where might the nine-year veteran logically go? Here are seven spots that seem to make sense:

They historically love to deal for known commodities. Also, coach Ron Rivera admitted during the season that the quarterback position was holding this team back – a comment he later walked back despite the truth in it, not to mention Rivera’s own culpability. Carr is essentially a baseline among NFL passers – think Kirk Cousins, Jimmy Garoppolo and the like – and has thrown for 35,222 yards and 217 touchdowns. He’s an incremental step up from Carson Wentz and Taylor Heinicke and has always been a steady locker room presence.

Washington was the only NFC East team to miss the playoffs this season, squandering a 7-5 start by winning one of its final five games. Carr could be the final part of a puzzle that’s got nice components, particularly on offense. However his apparent desire for stability, particularly as it pertains to ownership, could disqualify this turmoil-wracked organization.

A trade here almost certainly won’t occur. The Seahawks, who did reach the postseason, will have to decide in the coming weeks whether to franchise and/or re-sign pending free agent QB Geno Smith coming off his breakout season – an outcome that seems plausible. Even if Smith leaves, the Seahawks are in a decent position to draft a replacement, holding the fifth overall pick of the 2023 draft thanks to last year’s Russell Wilson blockbuster. But if Seattle doesn’t keep Smith and 71-year-old head coach Pete Carroll doesn’t want to wait on another rookie to develop, Carr could be an ideal fallback – especially if the California native is willing to make some concessions to remain on the West Coast.

Yes, the entire division could be in play for Carr.

Atlanta Falcons: They’ll pick eighth in the draft’s first round, hardly a guarantee they’ll get a top QB prospect. Per overthecap.com, Atlanta will have more than $60 million available in free agency, second most in the league. Carr won’t be confused with Lamar Jackson or Justin Fields, but he is mobile and his game is perhaps similar enough to Ryan Tannehill’s that Falcons coach Arthur Smith, previously the Tennessee Titans offensive coordinator, could employ him to a higher degree of efficacy than Marcus Mariota or rookie Desmond Ridder achieved in 2022. Adding Carr to the equation would allow for Ridder’s continued development but would theoretically also give this club – which has young offensive playmakers in RB Tyler Allgeier, WR Drake London and TE Kyle Pitts – a better chance to win a weak division.

Carolina Panthers: They’ll select one spot after Atlanta in Round 1 of this year’s draft and don’t currently have any cap space to accommodate a starting quarterback’s salary. But with Sam Darnold and PJ Walker no longer under contract, a team that needed to upgrade under center anyway also must obtain someone to play the position in 2023 and beyond. From Carr’s perspective, this is another team – with several top-tier players on both sides of the ball – that should contend almost immediately, regardless of who its next coach is.

New Orleans Saints: Andy Dalton is headed for free agency, and Jameis Winston didn’t play after Week 3. The enticement of playing in the NFC South obviously also applies here, and what QB1 wouldn’t want to join forces with RB Alvin Kamara, WR Chris Olave and, theoretically, former All-Pro Michael Thomas. However, for now, the Saints must still go through their annual exercise of cutting players and restructuring contracts before they comply with the 2023 salary cap and can take on a salary commensurate with what Carr would require. New Orleans has no first-round pick in 2023.

Tampa Bay Buccaneers: Monday could be QB Tom Brady’s final game with this team, whether he decides to retire or sign with a new organization in 2023. (TB12 can’t be franchised.) No one will confuse Carr’s bona fides – his only career playoff start occurred in last season’s loss to the Cincinnati Bengals – with Brady’s. But he is a veteran who likes to sling it, and if the Bucs lose Brady but want to continue competing in this division without going through a rebuild, Carr could be a viable short-term option – again, presuming they get their salary cap sufficiently in order.

This might be the sweetest spot for all parties involved at this particular point in time. Although perhaps average by contemporary NFL quarterbacking standards, Carr would provide a level of performance and stability the Jets haven’t seen probably since Chad Pennington, who wasn’t nearly as durable as Carr has been. The Jets currently have $3 million in cap space for 2023 but could easily create more, owner Woody Johnson saying he’s ready to spend on a quarterback acquisition if need be. Although New York is a different beast when it comes to media coverage, it’s an area where Carr has always handled himself with exceptional skill. And although he’d clearly be imported to start, he’d serve as a great professional example if there’s any hope of saving Zach Wilson. But the main thing is the main thing, and a talent-laden team that got off to a surprising 7-4 start in 2022 almost certainly doesn’t lose its final six games – and likely qualifies for the postseason – with someone of Carr’s caliber at the controls.