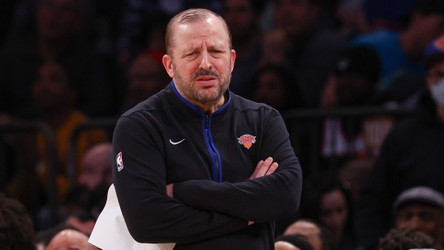 Tom Thibodeau did not criticize any specific calls made during the Knicks‘ overtime loss to Torontobut he made it clear that he wasn’t happy with the officiating.

“It was hard to tell what a foul was,” Thibodeau said Monday evening.

Toronto shot 41 free throws in their overtime win. The Knicks shot 35. The gap doesn’t seem egregious until you look at it through the lens of two-point attempts.

Obviously, every call matters in a two-point game. And Thibodeau wasn’t thrilled with several calls over the course of the game.

“I don’t really care if a game’s called tight or if it’s called loose,” Thibodeau said after the Knicks fell to 25-20 on the season. “I just want consistency. That’s what I look for. And so, (the game) was physical. It was. There was a lot going on. And so, again, I wanna watch to make sure I saw what I thought I saw.”

Thibodeau challenged a shooting foul on him Jalen Brunson with 3:27 to play in overtime and the Knicks down one. Referees denied Thibodeau’s challenge; the Knicks lost a timeout and Fred Van Vleet hit both free throws to give the Raptors a three-point edge.

“I think it was Scottie (Barnes) that bumped me into (Van Vleet),” Brunson said. “They felt otherwise, and that was that.”

The replay seemed to support Brunson. The call was one of several that irked Thibodeau. But the Knicks also missed four of their final 11 free throws – key misses in a close game.

The Knicks fell to 11-12 at home on the season. They are the only team in the NBA with a winning record overall but a sub-.500 record at home.

Monday was another game where they had a few costly mistakes late in a close game at home.

They are 5-8 at home in clutch games, per NBA.com. Clutch games are defined as contests within five points in the final five minutes.

Brunson had a chance to win the game at the end of overtime. He pulled up from beyond the arc with about three seconds left and the Knicks down two. Brunson may have had time to get to the rim, but he saw a Raptors defender backing up and liked the shot.

“It’s a shot I worked on all the time, and I thought it was good,” Brunson said.

He had 26 points on 11-for-29 shooting against Toronto. Brunson, last week’s Eastern Conference Player of the Week, also had seven rebounds. Brunson is the first guard with at least 25 points in seven straight games since Walt “Clyde” Frazier did it in 1971

RJ Barrett had a remarkable dunk at the end of regulation to send the game to overtime. He rebounded a Barnes missed free throw and dribbled end to end, finishing with a dunk over Barnes to tie the score at 110-110 with 0.6 seconds left.

That Brunson, Barrett’s dunk and his overall game indicate that he’s feeling good after missing six games due to a finger laceration/dislocation.

“He’s back, he’s back,” Brunson said after Barrett had 32 points on 10-for-23 shooting in 49 minutes. “He’s worked really hard to get back and trying to get back into the rhythm, and I think this was his I’m back in rhythm game. I’m just excited how he played tonight. I wish we could’ve brought home the win for him, because he played great, and he deserved it.”

Brunson played 44 minutes on Monday, his eighth game of at least 38 minutes. The previous seven were regulation games.

Brunson said afterwards that Thibodeau knows when he needs a rest.

“I like being able to give it my all whenever I’m on the court,” Brunson said. “If I look tired, if I look like I’m dragging, I think Thibs knows when to take me out. But I’m comfortable with whatever, whatever the team needs, whatever the case may be. I’ve been good in my life with adapting, so I just adapt to whatever is necessary.”

Julius Randle played 42 minutes. He also said afterwards that he wasn’t concerned about the minutes load.

Randle didn’t look tired when, in overtime, he jumped a pass on the perimeter and finished a layup through contact on the other end.

Randle said afterward that he was able to read the play based on past Raptors’ actions and their personnel.

“When they took Fred off the ball. I was guarding OG (Anunoby) and they started using him as the point guard to get into the set,” Randle said. “I knew exactly what they were doing, trying to get Scottie the ball at the elbow and run a low angle pick and roll with him and Fred. I just timed it and that’s it.”

Randle, Barrett and Brunson addressed the Garden crowd before tipoff. Randle called it an honor for him and his teammates to play on Monday and honor Dr. Martin Luther King Jr.’s legacy.

“His words now are more important than ever,” Randle said.

Barrett, Brunson then shared some of Dr. King’s messages with the crowd. The Knicks played other pre-taped messages from players about King Jr. throughout the game.